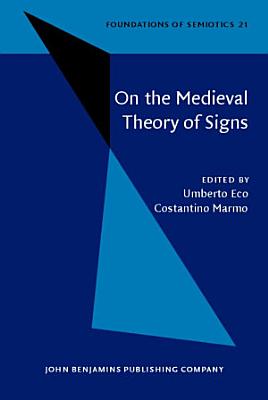 In the course of the long debate on the nature and the classification of signs, from Boethius to Ockham, there are at least three lines of thought: the Stoic heritage, that influences Augustine, Abelard, Francis Bacon; the Aristotelian tradition, stemming from the commentaries on "De Interpretatione;" the discussion of the grammarians, from Priscian to the Modistae. Modern interpreters are frequently misled by the fact that the various authors regularly used the same terms. Such a homogeneous terminology, however, covers profound theoretical differences. The aim of these essays is to show that the medieval theory of signs does not represent a unique body of semiotic notions: there are diverse and frequently alternative semiotic theories. This book thus represents an attempt to encourage further research on the still unrecognized variety of the semiotic approaches offered by the medieval philosophies of language.

On the Medieval Theory of Signs

In the course of the long debate on the nature and the classification of signs, from Boethius to Ockham, there are at least three lines of thought: the Stoic he

Karl Buhler (1879-1963) was one of the leading theoreticians of language of the twentieth century. This is an English translation of Buhler's theory that begins

This volume contains selected proceedings of the conferences held at Kirchberg, August 26, 1984 and Essen, November 21–24, 1984 devoted to Karl Bühler's Theo

This abridged and revised edition of the original book (Springer-Wien-New York: 2001) offers the only comprehensive history and documentation of the Vienna Circ

The Empire of Signs

Like Roland Barthes' well-known book, L’Empire des signes, from which the title of the present collection is taken, this volume contains essays dealing with c

Reflections on Language and Language Learning

In Reflections on Language and Language Learning: In honour of Arthur van Essen, thirty-one leading language scholars and educational linguists in the Netherlan

This volume brings together a collection of papers on the general theoretical and methodological problems in the historiography of semiotics. It is not a histor

Apart from the Tractatus, Wittgenstein did not write whole manuscripts, but composed short fragments. The current volume reveals the depths of Wittgenstein's so

Charles W. Morris' doctoral thesis Symbolism and Reality, written in 1925 at Chicago under George H. Mead, has never before been published. It sets out to prove

Theories of the Theatre

Beginning with Aristotle and the Greeks and ending with semiotics and post-structuralism, Theories of the Theatre is the first comprehensive survey of Western d