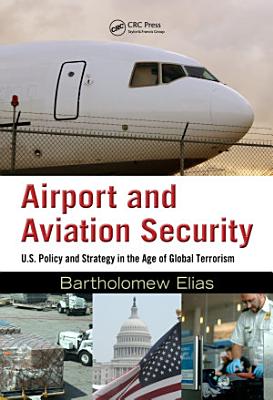 The response of the U.S. federal government to the events of September 11, 2001 has reflected the challenge of striking a balance between implementing security measures to deter terrorist attacks while at the same time limiting disruption to air commerce. Airport and Aviation Security: U.S. Policy and Strategy in the Age of Global Terrorism is a comprehensive reference that examines the persistent threats to aviation security that led up to the terrorist attacks of September 11th, describes subsequent terror plots against aviation assets, and explores U.S. efforts to counter and mitigate these threats. Addressing the homeland security challenges facing the U.S. in the age of terrorism, this text explores: Security protocol prior to 9/11 Precursors to 9/11 The rising threat of Al Qaeda Tactical and congressional response to 9/11, including new legislation The broader context of risk assessment Intelligence gathering Airport security, including passenger, baggage, and employee screening Airline in-flight security measures Airport perimeter security The threat of shoulder-fired missiles Security for GA (general aviation) operations and airports Beginning with a historical backdrop describing the dawn of the age of global terrorism in the 1960s and continuing up until the present time, the book demonstrates the broad social and political context underlying recent changes in the aviation security system as a direct result of the 9/11 attacks. Coverage examines ongoing threats and vulnerabilities to the aviation infrastructure, including an exploration of how past terrorist incidents have come to shape U.S. policy and strategy.

The response of the U.S. federal government to the events of September 11, 2001 has reflected the challenge of striking a balance between implementing security

Considered the definitive handbook on the terrorist threat to commercial airline and airport security, Sweet's seminal resource is now updated to include an ana

In the years preceding the terrorist attacks of September 11, 2001, the United States lacked a comprehensive national policy and strategy for aviation security.

The second edition of Practical Aviation Security is a complete guide to the aviation security system, from crucial historical events to the policies, policymak

In the Indian context.

After 9/11, the initial focus from the U.S. government, media, and the public was on security at commercial airports and aboard commercial airlines. Soon, inves