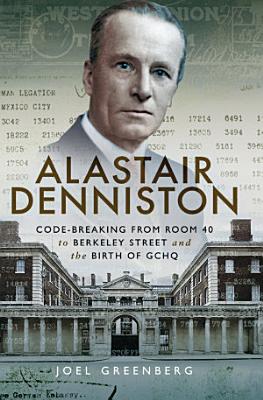 “The expertly researched biography of the man who created and led the British intelligence organization best known for cracking the Nazi’s codes.” —Midwest Book Review Some of the individuals who played key roles in the success of Bletchley Park in reading the secret communications of Britain’s enemies during the Second World War have become well-known figures. However, the man who created and led the organization based there, from its inception in 1919 until 1942, has, surprisingly, been overlooked—until now. In 1914 Alastair Denniston, who had been teaching French and German at Osborne Royal Navy College, was one of the first recruits into the Admiralty’s fledgling codebreaking section that became known as Room 40. There, a team drawn from a wide range of professions successfully decrypted intercepted German communications throughout the First World War. After the Armistice, Room 40 was merged with the British Army’s equivalent section—MI1—to form the Government Code and Cypher School (GC&CS). Initially based in London, from August 1939, GC&CS was largely located at Bletchley Park, with Alastair Denniston as its Operational Director. With the support and assistance of both the Denniston family and GCHQ, Joel Greenberg, author of Gordon Welchman: Bletchley Park’s Architect of Ultra Intelligence, has produced this absorbing story of Commander Alexander “Alastair” Guthrie Denniston OBE, CBE, CMG, RNVR, a man whose death in 1961 was ignored by major newspapers and the very British intelligence organization that was his legacy. “An enthralling account of Alastair Denniston and his contribution to modern electronic intelligence. This book follows from his excellent biography of another great of signals intelligence, Gordon Welshman.” —Fire Reviews

“The expertly researched biography of the man who created and led the British intelligence organization best known for cracking the Nazi’s codes.” —Midw

The dramatic, untold story of the brilliant team whose feats of innovation and engineering created the world’s first digital electronic computer—decrypting

"In The Other Greek, Arthur Cooper offers a captivating and unorthodox introduction to the world of the Chinese script through the medium of poetry, explaining

The Codebreakers of Bletchley Park

A Century of Spies

Examines the role of espionage in world history through a discussion of information gathering in the modern world, including spy technology, the Cold War, and c

British and American Approaches to Intelligence

Fully revised for its third edition, the Oxford Handbook of Ophthalmology is a concise, systematic guide to all aspects of diagnosis, assessment, and ongoing ma

The Spies of Winter

Following on from the enormous success of his bestseller, The Secret Life of Bletchley Park, renowned author Sinclair McKay uncovers the story of what happened

The Scene Menagerie contains an assortment of fiction scenes and episodes from the novels and short stories of one author, John R. Downes, plus a few excerpts f

In the years immediately following World War II, information was disclosed about what has been termed the shadow war of the existence of hitherto secret agencie