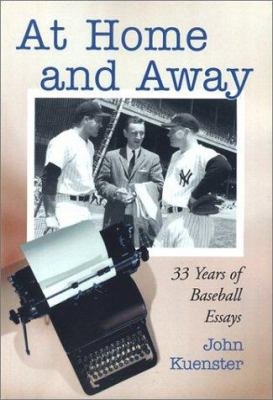 Over the course of his long career of covering major league baseball, numerous players, managers, umpires, and games, as well as unexpected and humorous events on and off the field, have made lasting impressions on John Kuenster. This is a selection of essays Kuenster wrote for "Warm Up Tosses," the Baseball Digest column he has written every month since he became editor of the Digest in 1969. He shares his opinions and insights on managers in columns like "Casey Stengel Was One of a Kind" and "George Anderson Still 'Sparky' When Talking Baseball"; history in "President Kennedy, No Stranger to Baseball" and "Baseball's Brightest and Darkest Moments of 1900s"; pitchers in "Here's a Vote for Whitey Ford" and "Complete-Game Pitchers, A Disappearing Breed in the Majors"; umpires in "Umps, Love 'em or Not, They're Vital to the Game"; infielders in "Derek Jeter, Cornerstone of Recent Yankee Championships" and "Third Basemen, Crucial to Winning but Often Overlooked"; outfielders in "Please, No 'Soft Pitches' for Hank Aaron" and "Barry Bonds Had a Season for the Ages"; and catchers in "Many Catchers Struggling through Learning Process". Also included are some of Kuenster's columns about scouts and coaches, team executives, hitting, baseball in general, teams, ball parks, the World Series, humor, and Hall of Famers.

At Home and Away

Over the course of his long career of covering major league baseball, numerous players, managers, umpires, and games, as well as unexpected and humorous events

Foreign at Home and Away

An Indian-born foreign service officer killed in the U.S. embassy bombing in Nairobi, Kenya. An Austrian-born doctor who volunteered her medical skills in Japan

Victorians at Home and Away

At Home and Away

A beginning reader introducing the members and activities of two families.

The Missionary Herald at Home and Abroad

Bringing in Sheaves. A Record of Evangelistic Labour in the United States, from the Atlantic to the Pacific

Authors: A. B. EARLE
Categories: