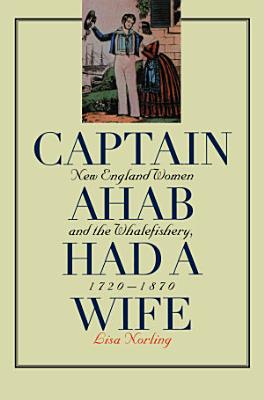 During the eighteenth and nineteenth centuries, the whaling industry in New England sent hundreds of ships and thousands of men to distant seas on voyages lasting up to five years. In Captain Ahab Had a Wife, Lisa Norling taps a rich vein of sources--including women's and men's letters and diaries, shipowners' records, Quaker meeting minutes and other church records, newspapers and magazines, censuses, and city directories--to reconstruct the lives of the "Cape Horn widows" left behind onshore. Norling begins with the emergence of colonial whalefishery on the island of Nantucket and then follows the industry to mainland New Bedford in the nineteenth century, tracking the parallel shift from a patriarchal world to a more ambiguous Victorian culture of domesticity. Through the sea-wives' compelling and often poignant stories, Norling exposes the painful discrepancies between gender ideals and the reality of maritime life and documents the power of gender to shape both economic development and individual experience.

Captain Ahab Had a Wife

During the eighteenth and nineteenth centuries, the whaling industry in New England sent hundreds of ships and thousands of men to distant seas on voyages lasti

Cases of mutiny and other forms of protest are used to reveal full and interesting details of lascar shipboard life.

Employing the first analysis of the entire population of any British town, this book examines how overseas migrants affected society and culture in South Shield

This collection examines the dynamic experimentation of contemporary women writers from North America, Australia, and the UK. Blurring the dichotomies of the po

Liberty on the Waterfront

Through careful research and colorful accounts, historian Paul A. Gilje discovers what liberty meant to an important group of common men in American society, th

Native American Whalemen and the World

In the nineteenth century, nearly all Native American men living along the southern New England coast made their living traveling the world's oceans on whaleshi

The Captain's Widow of Sandwich

Despite the port’s prominence in maritime history, its cultural significance has long been neglected in favour of its role within economic and imperial networ

Leviathan: The History of Whaling in America