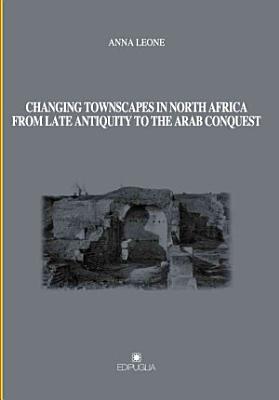 "This book examines the complex transition of North Africa from the Late Roman period to the Arab conquest, focusing on three provinces: Zeugitana, Byzacena and Tripolitana. In particular, it considers the continuity and transformation of towns, as a result of economic, political and social changes. The period sees the wide diffusion of Christianity, the imposition of Vandal rule and Arianism, the presence of a new Empire and the Arab/Muslim takeover. It is also a period of archaeological and material transition: physically towns changed and classical structures, in particular, decayed and were reused. The evidence considered here encompasses a wide range of material, including publications from 1800 (Italian and French colonial excavations) to modern times. These data form the basis for a detailed review of archaeological evidence in this geographical area and for the analysis of the processes of evolution that characterised North African cities"--

"This book examines the complex transition of North Africa from the Late Roman period to the Arab conquest, focusing on three provinces: Zeugitana, Byzacena and

A Companion to North Africa in Antiquity

Explore a one-of-a-kind and authoritative resource on Ancient North Africa A Companion to North Africa in Antiquity, edited by a recognized leader in the field,

Late Antiquity on the Eve of Islam

This volume reflects the huge upsurge of interest in the Near East and early Islam currently taking place among historians of late antiquity. At the same time,

The Mediterranean World in Late Antiquity

This thoroughly revised and expanded edition of The Mediterranean World in Late Antiquity, now covering the period 395-700 AD, provides both a detailed introduc

This volume proposes a new approach to the Arab conquests and the spread of Islam in North Africa. In recent years, those studying the Islamic world have shown

The Oxford Dictionary of Late Antiquity

The Oxford Dictionary of Late Antiquity is the first comprehensive reference book covering every aspect of history, culture, religion, and life in Europe, the M

This collection of papers, arising from the Late Antique Archaeology conference series, explores war and warfare in Late Antiquity. Papers examine strategy and

Daily Life in Late Antiquity is the first comprehensive study of lived experience in the Late Roman Empire, from c.250–600 CE. Each of the six topical chapter

The Archaeology of Late Antique 'Paganism'

This collection of papers, arising from the conference series Late Antique Archaeology, examines the archaeology of 'paganism' in late antiquity. Papers explore

English summary: In the early middle ages the court was a centre for meetings of secular and clerical princes. At the court of emperors, kings, and popes, the p