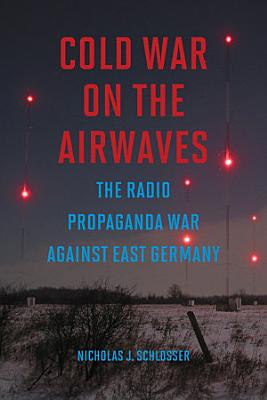 Founded as a counterweight to the Communist broadcasters in East Germany, Radio in the American Sector (RIAS) became one of the most successful public information operations conducted against the Soviet Bloc. Cold War on the Airwaves examines the Berlin-based organization's history and influence on the political worldview of the people--and government--on the other side of the Iron Curtain. Nicholas Schlosser draws on broadcast transcripts, internal memoranda, listener letters, and surveys by the U.S. Information Agency to profile RIAS. Its mission: to undermine the German Democratic Republic with propaganda that, ironically, gained in potency by obeying the rules of objective journalism. Throughout, Schlosser examines the friction inherent in such a contradictory project and propaganda's role in shaping political culture. He also portrays how RIAS's primarily German staff influenced its outlook and how the organization both competed against its rivals in the GDR and pushed communist officials to alter their methods in order to keep listeners. From the occupation of Berlin through the airlift to the construction of the Berlin Wall, Cold War on the Airwaves offers an absorbing view of how public diplomacy played out at a flashpoint of East-West tension.

Cold War on the Airwaves

Founded as a counterweight to the Communist broadcasters in East Germany, Radio in the American Sector (RIAS) became one of the most successful public informati

While there are many books that deal with Brandt's foreign policy as West German Chancellor, Willy Brandt and International Relations is the only book to deal w

Mark D. Alleyne analyzes the key role of the UN's public information department in the organization's pursuit of its objectives. The prominence of concepts such

War of the Black Heavens

In this innovative and thought-provoking study, Kira Kosnick explores the landscape of Turkish-language broadcasting in Berlin. From 24-hour radio broadcasting

The SAGE International Encyclopedia of Mass Media and Society

The SAGE International Encyclopedia of Mass Media and Society discusses media around the world in their varied forms—newspapers, magazines, radio, television,

The Geopolitics Reader offers an interdisciplinary sourcebook of the most important political, geographical, historical and sociological readings of geopolitics

Jazz in Socialist Hà Nội: Improvisations between Worlds examines the germination and growth of jazz under communist rule—perceived as the "music of the ene