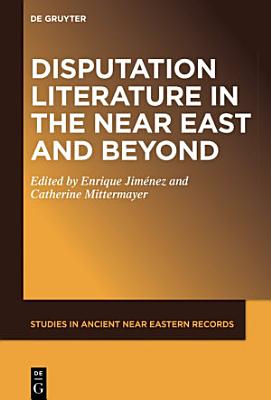 Disputation literature is a type of text in which usually two non-human entities (such as trees, animals, drinks, or seasons) try to establish their superiority over each other by means of a series of speeches written in an elaborate, flowery register. As opposed to other dialogue literature, in disputation texts there is no serious matter at stake only the preeminence of one of the litigants over its rival. These light-hearted texts are known in virtually every culture that flourished in the Middle East from Antiquity to the present day, and they constitute one of the most enduring genres in world literature. The present volume collects over twenty contributions on disputation literature by a diverse group of world-renowned scholars. From ancient Sumer to modern-day Bahrain, from Egyptian to Neo-Aramaic, including Latin, French, Middle English, Armenian, Chinese and Japanese, the chapters of this book study the multiple avatars of this venerable text type.

This book is the first extensive research on the role of poetry during the Iranian Revolution (1979) and the Iran-Iraq War (1980-1988). How can poetry, especial

Gods and Mortals in Early Greek and Near Eastern Mythology

Explores the interaction between Greece and the Ancient Near East through stories about the gods and their relationships with humankind.

Dispute Poems and Dialogues in the Ancient and Mediaeval Near East

In 1989 the University of Groningen celebrated its 375th anniversary. Near Eastern Studies, in one form or another, have been part of the Groningen curriculum a

The Journal of the Association of Graduates in Near Eastern Studies

Concepts of the Other in Near Eastern Religions

This text examines the philosophical concept of "other" in the Near Eastern religions. It contains essays that are divided into three sections: the Ancient Near

History and Identity in the Late Antique Near East

This volume arose out of a seminar series organised at the Classics Centre of Corpus Christi College, Oxford in 2009 and a subsequent workshop in 2010.

The Book of Job

Carol Newsom illuminates the relation between the aesthetic forms of Job and the claims made by its various characters. Her innovative approach makes possible a

Dress Hermeneutics and the Hebrew Bible

Antonios Finitsis and contributors continue their examination of dress and clothing in the Hebrew Bible in this collection of illuminating essays. Straddling th

A one-volume commentary meant to complement The New Interpreter's Study Bible contains articles on all the books of the Bible, including the Apocrypha; general