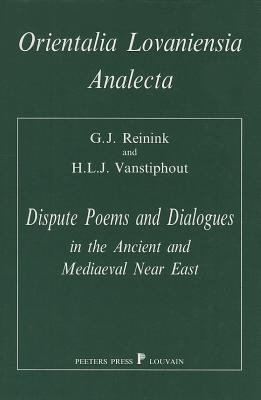 In 1989 the University of Groningen celebrated its 375th anniversary. Near Eastern Studies, in one form or another, have been part of the Groningen curriculum almost from the beginning. For this reason the Department of Middle-Eastern Languages and Cultures decided to contribute to the anniversary celebrations by organizing an international Symposium and a Workshop on The Literary Debate in Semitic and Related Literatures. The topic of the Symposium and the Workshop was chosen and prepared by the members of the research programme Disclosure of Semitic Texts. Since 1985 the literary debate in the Sumerian, Akkadian, Hebrew, Aramaic/Syriac and Arabic language and literature has been a central theme within this Groningen research programme. Because the research group sees as one of its tasks to place the study of the literary and cultural heritage of the Ancient and Mediaeval Near East also in the wider context of its connection with Classical Antiquity and the European Middle Ages, specialists in Byzantine and Mediaeval Studies were also invited to contribute to the Symposium and Workshop. The present volume contains the contributions presented during the Symposium and Workshop on The Literary Debate in the Semitic and Related Literatures. Some of the more important issues regarding matters of genesis, development and possible interdependence of the dispute poems, dialogues and related texts, which can all be subsumed under the general type of 'debate', are discussed in the introduction, which also reflects a number of points raised in the discussions during the Workshop itself.

Dispute Poems and Dialogues in the Ancient and Mediaeval Near East

In 1989 the University of Groningen celebrated its 375th anniversary. Near Eastern Studies, in one form or another, have been part of the Groningen curriculum a

Dispute Poems and Dialogues in the Ancient and Medieval Near East

The Poet and the World

A collection of seventeen essays on pre-modern Hebrew poetry in honor of Wout van Bekkum. The articles in this volume all seek to examine how the religious, cul

Metaphor and Imagery in Persian Poetry

This volume contains ten chapters on Persian metaphors, tropes, rhetorical figures, and poetic forms and genres, by some of the world's foremost scholars in the

Theology and Poetry in Early Byzantium

The Case of Rhyme versus Reason

This book examines the life and times and poetry of the extremely prolific and versatile ‘Abbāsid poet Ibn al-Rūmī (d. 283/896). Particular attention is de

The Oxford Handbook of Wisdom and the Bible

This collection of leading scholars presents reflections on both wisdom as a general concept throughout history and cultures, as well as the contested nature of