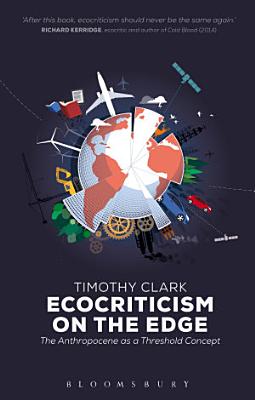 The twenty-first century has seen an increased awareness of the forms of environmental destruction that cannot immediately be seen, localised or, by some, even acknowledged. Ecocriticism on the Edge explores the possibility of a new mode of critical practice, one fully engaged with the destructive force of the planetary environmental crisis. Timothy Clark argues that, in literary and cultural criticism, the “Anthropocene”, which names the epoch in which human impacts on the planet's ecological systems reach a dangerous limit, also represents a threshold at which modes of interpretation that once seemed sufficient or progressive become, in this new counterintuitive context, inadequate or even latently destructive. The book includes analyses of literary works, including texts by Paule Marshall, Gary Snyder, Ben Okri, Henry Lawson, Lorrie Moore and Raymond Carver.

Ecocriticism on the Edge

The twenty-first century has seen an increased awareness of the forms of environmental destruction that cannot immediately be seen, localised or, by some, even

This volume gathers together papers presented at the conference “Ecocriticism in the Nordic Countries; Yesterday, Today, Tomorrow” held in Västerås, Swede

The Value of Ecocriticism

The Value of Ecocriticism offers a brief, incisive overview of the fast-changing field of environmental literary criticism in a bewildering age of global enviro

The Cambridge Companion to Literature and the Anthropocene

The Anthropocene is a proposed geological epoch marking humanity's alteration of the Earth: its rock structure, environments, atmosphere. The Cambridge Companio

In the popular imagination, art history remains steeped in outmoded notions of tradition, material value and elitism. How can we awaken, define and orientate an

A feminist approach to the Anthropocene that recovers the relevance of sensation and phenomenology. Earthly Encounters develops a fuller account of the lived ex

Turkish Ecocriticism: From Neolithic to Contemporary Timescapes explores the values, perceptions, and transformations of the environment, ecology, and nature in

The Routledge Handbook of Vegan Studies

This wide-ranging volume explores the tension between the dietary practice of veganism and the manifestation, construction, and representation of a vegan identi

Ecocritical Concerns and the Australian Continent