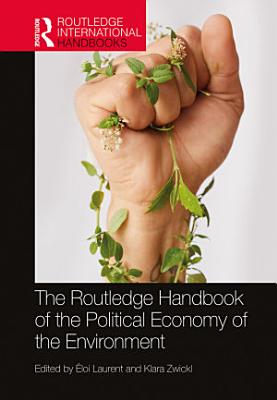 Featuring a stellar international cast list of leading and cutting-edge scholars, The Routledge Handbook of the Political Economy of the Environment presents the state of the art of the discipline that considers ecological issues and crises from a political economy perspective. This collective volume sheds new light on the effect of economic and power inequality on environmental dynamics and, conversely, on the economic and social impact of environmental dynamics. The chapters gathered in this handbook make four original contributions to the field of political economy of the environment. First, they revisit essential concepts and methods of environmental economics in the light of their political economy. Second, they introduce readers to recent theoretical and empirical advances in key issues of political economy of the environment with a special focus on the relationship between inequality and environmental degradation, a nexus that has dramatically come into focus with the COVID crisis. Third, the authors of this handbook open the field to its critical global and regional dimensions: global issues, such as the environmental justice movement and inequality and climate change as well as regional issues such as agriculture systems, air pollution, natural resources appropriation and urban sustainability. Fourth and finally, the work shows how novel analysis can translate into new forms of public policy that require institutional reform and new policy tools. Ecosystems preservation, international climate negotiations and climate mitigation policies all have a strong distributional dimension that chapters point to. Pressing environmental policy such as carbon pricing and low-carbon and energy transitions entail numerous social issues that also need to be accounted for with new analytical and technological tools. This handbook will be an invaluable reference, research and teaching tool for anyone interested in political economy approaches to environmental issues and ecological crises.

The Routledge Handbook of the Political Economy of the Environment

Featuring a stellar international cast list of leading and cutting-edge scholars, The Routledge Handbook of the Political Economy of the Environment presents th

Report on the State of the European Union

The Report on the State of the European Union examines the progress of European integration and focuses on economic aspects of the process. This third volume in

Too often, economics disassociates humans from nature, the economy from the biosphere that contains it, and sustainability from fairness. When economists do eng

How moving beyond GDP will improve well-being and sustainability Never before in human history have we produced so much data, and this empirical revolution has

The purpose of this volume, bringing together key actors of the well-being community, including scholars and policy-makers, is to advance the understanding and

Report on the State of the European Union

This volume, the fifth instalment of the classic Report on the European Union series, offers at once an economic and intellectual historical perspective on the

This volume is both a tribute to and study of the French economist Jean-Paul Fitoussi. Fitoussi's pluralistic scholarship has shaped modern macroeconomics, poli

This timely book brings clarity to the debate on the new legal phenomenon of environmental border tax adjustments. It will help form a better understanding of t

Well-Being: Expanding the Definition of Progress

Cities and countries around the world, from New Zealand to Singapore to Iceland, are starting to take a well-being approach by reorienting policies, budgets and

This atlas of postmortem angiography provides a summary of techniques that have been developed and used in order to visualize the human vascular system. The ind