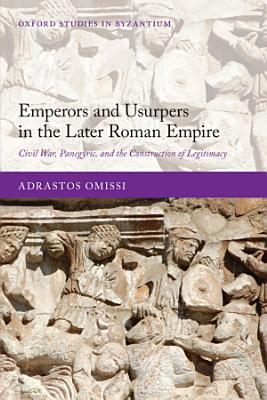 One of the great maxims of history is that it is written by the victors, and nowhere does this find greater support than in the later Roman Empire. Between 284 and 395 AD, no fewer than 37 men claimed imperial power, though today we recognize barely half of these men as 'legitimate' rulers and more than two thirds died at their subjects' hands. Once established in power, a new ruler needed to publicly legitimate himself and to discredit his predecessor: overt criticism of the new regime became high treason, with historians supressing their accounts for fear of reprisals and the very names of defeated emperors chiselled from public inscriptions and deleted from official records. In a period of such chaos, how can we ever hope to record in any fair or objective way the history of the Roman state? Emperors and Usurpers in the Later Roman Empire is the first history of civil war in the later Roman Empire to be written in English and aims to address this question by focusing on the various ways in which successive imperial dynasties attempted to legitimate themselves and to counter the threat of almost perpetual internal challenge to their rule. Panegyric in particular emerges as a crucial tool for understanding the rapidly changing political world of the third and fourth centuries, providing direct evidence of how, in the wake of civil wars, emperors attempted to publish their legitimacy and to delegitimize their enemies. The ceremony and oratory surrounding imperial courts too was of great significance: used aggressively to dramatize and constantly recall the events of recent civil wars, the narratives produced by the court in this context also went on to have enormous influence on the messages and narratives found within contemporary historical texts. In its exploration of the ways in which successive imperial courts sought to communicate with their subjects, this volume offers a thoroughly original reworking of late Roman domestic politics, and demonstrates not only how history could be erased, rewritten, and repurposed, but also how civil war, and indeed usurpation, became endemic to the later Empire.

Emperors and Usurpers in the Later Roman Empire

One of the great maxims of history is that it is written by the victors, and nowhere does this find greater support than in the later Roman Empire. Between 284

Emperors and Usurpers in the Later Roman Empire

Civil war and usurpation were endemic to the later Roman Empire, with no fewer than 37 men claiming imperial power between 284 and 395 AD. This volume construct

Imperial Panegyric from Diocletian to Honorius

Emperors and Usurpers the Transformation of the Late Roman State

'Emperors and Usurpers' is a history of the Roman period from the accession of Valentinian in 364 to the death of Marcian in 457, a period of turbulence and rad

With The Emperor and the Army in the Later Roman Empire, AD 235 395 Mark Hebblewhite offers the first study solely dedicated to examining the nature of the rela

In this second volume of the "Embers of Empires" series, Roman intelligence agent Marcus must escape the court of Emperor Constans when he uncovers the humiliat

This historical commentary examines books 79(78)-80(80) of Cassius Dio's Roman History, which cover the period from the death of Caracalla in A. D. 217. to the

A detailed overview of the tumultuous events of this pivotal period, in which a divided Rome was plagued by assassination, civil wars, and invading hordes. This

Consuls of the Later Roman Empire