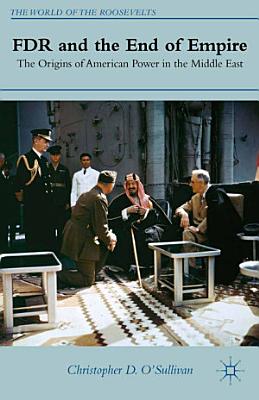 Based upon extensive archival research in Great Britain, the United States, and the Middle East, including sources never previously utilized such as declassified intelligence records, postwar planning documents, and the personal papers of key officials, this is painstakingly researched account of the origins of American involvement in the Middle East during the Presidency of Franklin D. Roosevelt. It explores the effort to challenge British and French power, and the building of new relationships with Iraq, Iran, Saudi Arabia, Egypt, and the Levant states. It also reveals new and controversial discoveries about Roosevelt's views on Palestine, his relations with Middle East leaders, and his often bitter conflicts with Churchill and de Gaulle over European imperialism. Modern-day parallels make this story compelling for followers of current events, World War II, Franklin Roosevelt, the Middle East, or British imperialism.

Wendell Willkie lost the 1940 presidential election but became America's most effective ambassador, embarking on a 7-week plane trip to bolster the allied cause

This collection uses Theodore Roosevelt to form a fresh approach to the history of US and European relations, arguing that the best place to look for the origin

Provides an evaluative survey of the literature on the most complex and perhaps most controversial campaign of World War II.

A New Deal for the World

In a work of sweeping scope and luminous detail, Elizabeth Borgwardt describes how a cadre of World War II American planners inaugurated the ideas and instituti

The Oxford Handbook of the Ends of Empire

This handbook is currently in development, with individual articles publishing online in advance of print publication. At this time, we cannot add information a

The most extensive and up-to-date bibliographic and historiographical survey of works by and about Churchill.