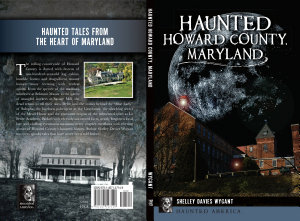 The rolling countryside of Howard County is dotted with dozens of two-hundred-year-old log cabins, humble homes and magnificent manor houses--many teeming with restless spirits. From the specter of the madman murderer at Belmont Manor to the spirits of mangled workers at Savage Mill, the dead return to tell their tales. Delve into the stories behind the "Blue Lady" of Salopha, the lovelorn poltergeist at the Grayhouse, the shocking secret of the Mead House and the gruesome origins of the tormented spirit at La Petite Academy. Packed with recently uncovered facts, nearly forgotten local lore and chilling eyewitness accounts, every chapter overflows with riveting stories of Howard County's haunted history. Author Shelley Davies Wygant uncovers spooky tales that have never been told before.

The rolling countryside of Howard County is dotted with dozens of two-hundred-year-old log cabins, humble homes and magnificent manor houses--many teeming with

Beginning with its founding in 1772, Ellicott City endured an endless procession of tragic deaths. As a result, this eighteenth-century mill town is packed with

Vengeful ghosts, sea monsters, and America's most haunted lighthouse figure prominently in this collection of eerie in tales from the Old Line State. From the r

All the sites in the book have been chosen with an eye toward several criteria, including how accessible they are to the public, how evocative experience a trip

In almost every town in America there are places where strange things happen. The perfect companion to The International Directory of Haunted Places, this revis

Hauntings lurk and spirits linger in the Old Line State Reader, beware! Turn these pages and enter the world of the paranormal, where ghosts and ghouls alike cr

This laugh-out-loud guide will introduce readers to the offbeat people, places, and events of the Old Line State.

The Haunted Mid-Shore: Spirits of Caroline, Dorchester and Talbot Counties

There is an otherworldly quality to the Mid-Shore--ghosts seem to rise up from the Chesapeake, and quaint towns hold the spirits of their historic pasts. Oxford

The stories, folklore, and history surrounding Maryland's most haunted places. A must-read for fans of the supernatural and Maryland history. The demon car of S