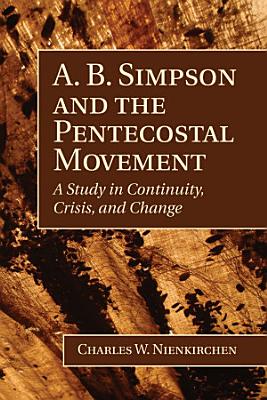 "Based on impressive research, the author has offered the spiritual heirs of A. B. Simpson, as well as the larger church world, an accurate interpretation of Simpson's spiritual pilgrimage. The information about Simpson's belief in speaking in tongues and the ministries of those who remained or left the Alliance over the issue, provides valuable insights into the close relationship between the organization and emerging Pentecostal movement." -- Gary B. McGee Professor of Church History, Assemblies of God Theological Seminary "It is good news indeed that Charles Nienkirchen's A. B. Simpson and the Pentecostal Movement is being republished. This is a very important and well written work which sheds light not only on A. B. Simpson's quest for the tongues-attested baptism in the Holy Spirit but on the milieu surrounding the early spread of Pentecostalism in America and especially in the Christian and Missionary Alliance. This is a historical treasure." --Vinson Synan, Dean Emeritus Regent University School of Divinity "Simpson has long deserved an in-depth study. A pivotal turn-of-the-century figure who never found full acceptance in any wing of American evangelicalism, this prolific Canadian nonetheless profoundly influenced popular evangelicalism and Anglo-American Pentecostalism. Nienkirchen makes careful use of long-unused primary sources to illuminate Simpson's relationship to early Pentecostalism. The result is a suggestive work that offers perceptive insights into early Pentecostalism and the context from which it emerged." -- Edith L. Blumhofer Project Director Institute for the Study of American Evangelicalism, Wheaton "Nienkirchen provides a splendid study of the relationship of A. B. Simpson to Pentecostalism. This book demonstrates wide knowledge of primary materials and great care in documentation (with about one-third of the text devoted to footnote material). Nienkirchen clearly delineates the major elements in Simpson's religious thought and gives attention to the most significant ways in which his thought changed. His major interest in this book focuses on the ways in which Simpson influenced the formation of early Pentecostalism. Pentecostals accept some elements of Simpson's teaching and rejected or modified others, but Nienkirchen argues persuasively the case for Simpson's importance in understanding Pentecostalism; moreover, he clearly illustrates specific ways -- both direct and indirect -- in which that influence was felt in the complex story of early holiness-pentecostal relationships." -- William Pitts Professor of Church History Baylor University "Charles Nienkirchen has supplied those interested in the history and theology of American Evangelicalism, the Christian and Missionary Alliance, or the Pentecostal movement with an invaluable reference tool and an interpretive lens through which to understand them. This 'must-read' has shown its worth by remaining as relevant, informative and provocative as when it first went to press." --Bernie A. Van De Walle Associate Professor of Historical and Systematic Theology Ambrose University College and Seminary Calgary, AB "In A. B. Simpson and the Pentecostal Movement, Charles Nienkirken has combined prodigious research with mastery of historical and theological sources to produce a superb study of Simpson's relationship with early pentecostalism. This is a most important and useful work." -- Randall Balmer Barnard College, Columbia University

A. B. Simpson and the Pentecostal Movement

"Based on impressive research, the author has offered the spiritual heirs of A. B. Simpson, as well as the larger church world, an accurate interpretation of Si

Budget Travel, A Guide to Travelling on a Shoestring is a practical and concise guide to travelling the world and exploring new destinations with fascinating op

The Handbook of New Age is a comprehensive survey of alternative spiritualities: their history, their global impact, their cultural influence and how they are u

We reprint the original version of the book “The teachings of Red Cloud”, published in 1934 including some of the first conferences held by Red Cloud betwee

In his fourth God’s Generals volume, Roberts Liardon chronicles God’s great healing evangelists of the twentieth century. Journey with such paragons of fait

God is the Healer. He willingly gave the back of His Beloved Son, Jesus, to be scourged so that by His stripes, healing would be made available for us. Using ma

God has given us powerful weapons to defeat the enemy, take back the spiritual land in our lives, and to walk in His glory. To do this we must lay deep foundati

Jesus before Pentecost studies the history of Jesus' ministry from William P. Atkinson's Pentecostal perspective. This perspective affects both his method and t

This is a new release of the original 1932 edition.