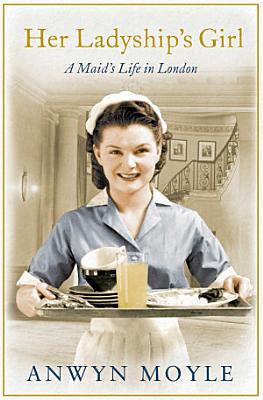 Anwyn Moyle was born at the end of the First World War in a small mining village in Wales. At the age of sixteen, she was sent to London to earn her living, where she found a live-in job as a scullery maid. Her day began at 5 a.m., cleaning grates and lighting fires, then she would scrub floors and polish the house - all for two shillings a week, one of which she had to send home to her mother. Things improved when she secured the position of lady's maid in a housein Belgravia, on five shillings a week. Anwyn was required to be a hairdresser, beautician, confidante and secretary. Reporting directly to the lady of the house, she was expected to cover up her mistress's affairs. Her time as a lady's maid was over when she was caught with a young aristocrat in her room and banished from the house, but Anwyn found further employment in a variety of houses, working above and below stairs. However, she found her niche in the jolly working-class atmosphere of the capital city's pubs. London between the wars and during the Blitz is richly evoked and, despite all her hardships, Anwyn never asks for the readers' sympathy. Her story is full of gregariousness and eccentricity, as well as being a poignant account of the history of a woman with an indomitable spirit and love of life.

Anwyn Moyle was born at the end of the First World War in a small mining village in Wales. At the age of sixteen, she was sent to London to earn her living, whe

The Girl of the period miscellany

The Novels of Captain Marryat

A New and Complete Concordance Or Verbal Index to Words, Phrases, & Passages in the Dramatic Works of Shakespeare

A Lady In Disguise With no dowry and unremarkable looks, Jessamyne Calderwood sees herself as a penniless country mouse. But when her greedy family attempts to