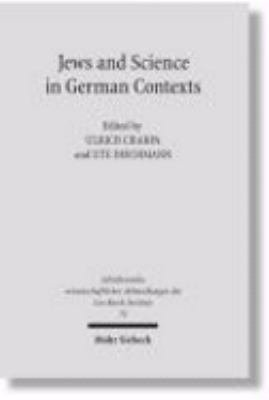 The authors examine the relationship between the cultural, religious and social situation of German Jews on the one hand and their scientific activities on the other. They discuss the sensitive question of the specificity of the approaches of Jewish scientists and draw attention to the debate concerning the relationship between Judaism and academic research, ranging from the early 19th century theorizing on science and Judaism to 20th century issues, e.g. the controversies on 'Jewish' physics, mathematics etc. in the 1920s and 30s. Contributors: Ute Deichmann, Anthony S. Travis, Moritz Epple, Raphael Falk, Ulrich Charpa, Nurit Kirsch, Yael Hashiloni-Dolev, Aharon Loewenstein, Ruth Sime, Simone Wenkel

Jews and Sciences in German Contexts

The authors examine the relationship between the cultural, religious and social situation of German Jews on the one hand and their scientific activities on the

The Origin of the Jews

The present anthology, edited by Marcel Herbst, is partially based on a conference, held in 2009, to reflect on the legacy of Ben-David, and contains a selectio

Rebels, Mavericks, and Heretics In Biology

This book is the first devoted to modern biology's innovators and iconoclasts: men and women who challenged prevailing notions in their fields. Some of these sc

The idea of an inevitable conflict between science and religion was decisively challenged by John Hedley Brooke in his classic Science and Religion: Some Histor

A New Field in Mind

In recent decades, developments in research technologies and therapeutic advances have generated immense public recognition for neuroscience. However, its origi

This volume analyses the scientific work and social implications of the flourishing field of genetic history. The author examines genetic history's working assu

After World War II, Ernst Ludwig Ehrlich (1921–2007) published works in English and German by eminent Israeli scholars, in this way introducing them to a wide