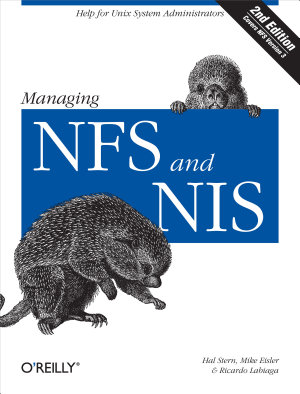 A modern computer system that's not part of a network is even more of an anomaly today than it was when we published the first edition of this book in 1991. But however widespread networks have become, managing a network and getting it to perform well can still be a problem.Managing NFS and NIS, in a new edition based on Solaris 8, is a guide to two tools that are absolutely essential to distributed computing environments: the Network Filesystem (NFS) and the Network Information System (formerly called the "yellow pages" or YP).The Network Filesystem, developed by Sun Microsystems, is fundamental to most Unix networks. It lets systems ranging from PCs and Unix workstations to large mainframes access each other's files transparently, and is the standard method for sharing files between different computer systems.As popular as NFS is, it's a "black box" for most users and administrators. Updated for NFS Version 3, Managing NFS and NIS offers detailed access to what's inside, including: How to plan, set up, and debug an NFS network Using the NFS automounter Diskless workstations PC/NFS A new transport protocol for NFS (TCP/IP) New security options (IPSec and Kerberos V5) Diagnostic tools and utilities NFS client and server tuning NFS isn't really complete without its companion, NIS, a distributed database service for managing the most important administrative files, such as the passwd file and the hosts file. NIS centralizes administration of commonly replicated files, allowing a single change to the database rather than requiring changes on every system on the network.If you are managing a network of Unix systems, or are thinking of setting up a Unix network, you can't afford to overlook this book.

A modern computer system that's not part of a network is even more of an anomaly today than it was when we published the first edition of this book in 1991. But

A practical introduction to SNMP for system network administrators. Starts with the basics of SNMP, how it works and provides the technical background to use it

Exim delivers electronic mail, both local and remote. It's the default mail transport agent installed on some Linux systems; it runs on many versions of Unix an

"Solaris 8 Administrator's Guide" covers all aspects of deploying Solaris as a net-work server, including both basic and advanced network services. The book sho

More and more, technology professionals are relying on the Web, online help, and other online information sources to solve their tough problems. Now, with O'Rei

The Unified Modeling Language (UML) is one of the most important languages for anyone in the software industry to know. The UML is a visual language enabling ar

This guide shows programmers and administrators how to implement, program and administer VOIP systems using open source tools instead of more expensive options.

UNIX in a Nutshell

Securing NFS in AIX An Introduction to NFS v4 in AIX 5L Version 5.3

NFS Version 4 (NFS V4) is the latest defined client-to-server protocol for NFS. A significant upgrade from NFS V3, it was defined under the IETF framework by ma