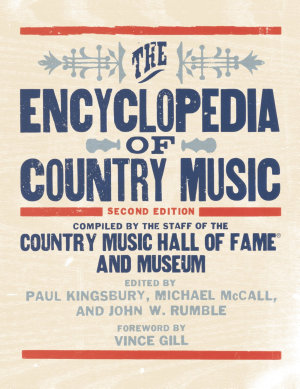 Immediately upon publication in 1998, the Encyclopedia of Country Music became a much-loved reference source, prized for the wealth of information it contained on that most American of musical genres. Countless fans have used it as the source for answers to questions about everything from country's first commercially successful recording, to the genre's pioneering music videos, to what conjunto music is. This thoroughly revised new edition includes more than 1,200 A-Z entries covering nine decades of history and artistry, from the Carter Family recordings of the 1920s to the reign of Taylor Swift in the first decade of the twenty-first century. Compiled by a team of experts at the Country Music Hall of Fame and Museum, the encyclopedia has been brought completely up-to-date, with new entries on the artists who have profoundly influenced country music in recent years, such as the Dixie Chicks and Keith Urban. The new edition also explores the latest and most critical trends within the industry, shedding light on such topics as the digital revolution, the shifting politics of country music, and the impact of American Idol (reflected in the stardom of Carrie Underwood). Other essays cover the literature of country music, the importance of Nashville as a music center, and the colorful outfits that have long been a staple of the genre. The volume features hundreds of images, including a photo essay of album covers; a foreword by country music superstar Vince Gill (the winner of twenty Grammy Awards); and twelve fascinating appendices, ranging from lists of awards to the best-selling country albums of all time. Winner of the Best Reference Award from the Popular Culture Association "Any serious country music fan will treasure this authoritative book." --The Seattle Times "A long-awaited, major accomplishment, which educators, historians and students, broadcasters and music writers, artists and fans alike, will welcome and enjoy." --The Nashville Musician "Should prove a valuable resource to those who work in the country music business. But it's also an entertaining read for the music's true fans." --Houston Chronicle "This big, handsome volume spans the history of country music, listing not only artists and groups but also important individuals and institutions." --San Francisco Examiner "Promises to be the definitive historical and biographical work on the past eight decades of country music. Well written and heavily illustratedan unparalleled work, worth its price and highly recommended." --Library Journal

The Encyclopedia of Country Music

Immediately upon publication in 1998, the Encyclopedia of Country Music became a much-loved reference source, prized for the wealth of information it contained

The Concise Garland Encyclopedia of World Music comprises two volumes, and can only be purchased as the two-volume set. To purchase the set please go to: http:/

The Garland Encyclopedia of World Music

African Americans' historical roots are encapsulated in the lyrics, melodies, and rhythms of their music. In the 18th and 19th centuries, African slaves, longin

This unique encyclopedia showcases the contribution of gay, lesbian, bisexual, transgender, and queer people to music, dance, and musical theater.

The Garland Encyclopedia of World Music

First published in 2000. Routledge is an imprint of Taylor & Francis, an informa company.

Continuum Encyclopedia of Popular Music of the World Volume 8

A comprehensive and authoritative reference to a huge range of American musical styles, from Barbershop to Bluegrass and from Ragtime to Rockabilly.

Music in American Life: An Encyclopedia of the Songs, Styles, Stars, and Stories that Shaped our Culture [4 volumes]

A fascinating exploration of the relationship between American culture and music as defined by musicians, scholars, and critics from around the world.

The Encyclopedia of Country Music