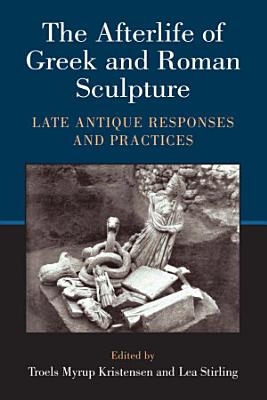 For centuries, statuary décor was a main characteristic of any city, sanctuary, or villa in the Roman world. However, from the third century CE onward, the prevalence of statues across the Roman Empire declined dramatically. By the end of the sixth century, statues were no longer a defining characteristic of the imperial landscape. Further, changing religious practices cast pagan sculpture in a threatening light. Statuary production ceased, and extant statuary was either harvested for use in construction or abandoned in place. The Afterlife of Greek and Roman Sculpture is the first volume to approach systematically the antique destruction and reuse of statuary, investigating key responses to statuary across most regions of the Roman world. The volume opens with a discussion of the complexity of the archaeological record and a preliminary chronology of the fate of statues across both the eastern and western imperial landscape. Contributors to the volume address questions of definition, identification, and interpretation for particular treatments of statuary, including metal statuary and the systematic reuse of villa materials. They consider factors such as earthquake damage, late antique views on civic versus “private” uses of art, urban construction, and deeper causes underlying the end of the statuary habit, including a new explanation for the decline of imperial portraiture. The themes explored resonate with contemporary concerns related to urban decline, as evident in post-industrial cities, and the destruction of cultural heritage, such as in the Middle East.

The Afterlife of Greek and Roman Sculpture

For centuries, statuary décor was a main characteristic of any city, sanctuary, or villa in the Roman world. However, from the third century CE onward, the pre

"This handbook brings together work by leading scholars of the archaeology of early Christianity in the Mediterranean and surrounding regions. The 34 essays to

This book highlights the diversity of current methodologies in Classical Archaeology. It includes papers about archaeology and art history, museum objects and f

A History of Roman Art

A HISTORY OF ROMAN ART The new edition of the leading textbook on Roman art, updated with new images and expanded geographic and cultural scope A History of Rom

Gender and the Body in Greek and Roman Sculpture

Offers analysis of selected works of ancient art through a critical use of cutting-edge theory from gender studies, body studies, and art history.

This book examines the various ways ancient Athenians purposefully reused stone artifacts, objects, and buildings in order to shape their own and their descenda

The Oxford Handbook of Greek and Roman Art and Architecture

This handbook explores key aspects of art and architecture in ancient Greece and Rome. Drawing on the perspectives of scholars of various generations, nationali

The Art of the Roman Empire

The passage from Imperial Rome to the era of late antiquity, when the Roman Empire underwent a religious conversion to Christianity, saw some of the most signif

Recent years in America have seen Confederate monuments toppled, statues of colonizers vandalized, and public icons commemorating figures from a history of expl