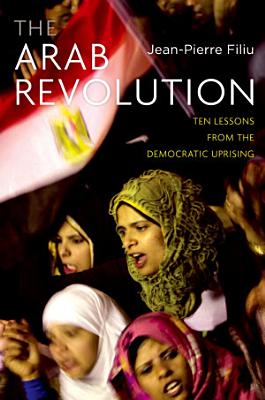 When Mohammad Bouazizi sets himself on fire on December 17, 2010, he started a series of extraordinary events that spread across the Middle East with stunning rapidity. In less than a month, President Ben Ali fled Tunisia, ending a twenty-three year regime. Shortly thereafter, on 11 February 2011, President Mubarak of Egypt stepped down after nearly thirty years in power. In The Arab Revolution, Jean-Pierre Filiu offers a concise but sweeping account of the earth-shattering revolts that began in Tunis and continue today throughout the Middle East. Stressing the deep historical roots of the events, Filiu organizes the book around ten lessons that illuminate both the uprisings in particular and the region in general. He shows, for instance, that these movements didn't erupt out of thin air--Arabs have been fighting for their rights for more than a generation. The author sheds light on the role of youth--whose anger is power, he notes, and who embrace the message "tomorrow is yours, if you fight for it"--as well as the important role that social networks played in Tunisia and Egypt. Filiu also argues that in the aftermath, jihadists are in a difficult position, because the essentially peaceful grassroots protests in Tunisia and Egypt have undercut their message of violence and indeed have called into question their relevance. The book also reveals that, despite being somewhat overshadowed by the Arab uprising, Palestine remains the central concern throughout the Middle East. By shining a light on these lessons rather than providing a strictly chronological account, Filiu provides a far richer and deeper portrait of the revolutionary movements sweeping the region--as well as an insightful look at life in the Middle East today.

When Mohammad Bouazizi sets himself on fire on December 17, 2010, he started a series of extraordinary events that spread across the Middle East with stunning r

The Arab Revolution of 2011

Comparative analysis of the 2011 Arab Spring uprisings. How do we make sense of the Arab revolution of 2011? What were its successes, its failures, and signific

This fast-paced and timely book from Vijay Prashad is the best critical primer to the Middle East conflicts today, from Syria and Saudi Arabia to the chaos in T

Discourses of the Arab Revolutions in Media and Politics

Explores all aspects of the revolutionary protests that have rocked the Middle East since December 2010, looking at such topics as the role of youth, labor and

Beyond the Arab Spring

Arab Revolution in the 21st Century?

In Arab Revolution in the 21st Century?, Nader Fergany presents a compassionate analysis of the Arab popular uprisings in the 21st century, with particular refe

This edited volume explores some of the key international law issues to have arisen from the events which comprised the 'Arab Spring.'

Constitutionalism, Human Rights, and Islam after the Arab Spring

Constitutionalism, Human Rights, and Islam after the Arab Spring offers a comprehensive analysis of the impact that new and draft constitutions and amendments -

From Libya in the east to the Gulf peninsula in the west, the 'Arab Spring' has shaken entrenched regimes. Decades-old dictatorships have fallen after mass prot