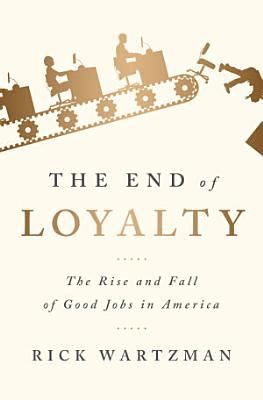 Having a good, stable job used to be the bedrock of the American Dream. Not anymore. In this richly detailed and eye-opening book, Rick Wartzman chronicles the erosion of the relationship between American companies and their workers. Through the stories of four major employers -- General Motors, General Electric, Kodak, and Coca-Cola -- he shows how big businesses once took responsibility for providing their workers and retirees with an array of social benefits. At the height of the post-World War II economy, these companies also believed that worker pay needed to be kept high in order to preserve morale and keep the economy humming. Productivity boomed. But the corporate social contract didn't last. By tracing the ups and downs of these four corporate icons over seventy years, Wartzman illustrates just how much has been lost: job security and steadily rising pay, guaranteed pensions, robust health benefits, and much more. Charting the Golden Age of the '50s and '60s; the turbulent years of the '70s and '80s; and the growth of downsizing, outsourcing, and instability in the modern era, Wartzman's narrative is a biography of the American Dream gone sideways. Deeply researched and compelling, The End of Loyalty will make you rethink how Americans can begin to resurrect the middle class. Finalist for the Los Angeles Times book prize in current interestA best business book of the year in economics, Strategy+Business

The End of Loyalty

Having a good, stable job used to be the bedrock of the American Dream. Not anymore. In this richly detailed and eye-opening book, Rick Wartzman chronicles the

The End of Ambition

A groundbreaking new history of how the Vietnam War thwarted U.S. liberal ambitions in the developing world and at home in the 1960s At the start of the 1960s,

The Wolf at the Door

The acclaimed authors of Death by a Thousand Cuts argue that Americans care less about inequality than about their own insecurity. Michael Graetz and Ian Shapir

In every industry, and any company, customer loyalty marketing is an important pillar of corporate strategy. This second edition of Customer Loyalty Programmes

The Power of Loyalty

Loyalty strategist Roger L. Brooks invites you to take part in the growing loyalty movement and shows you how to build a successful loyalty strategy following 1

A witty, provocative, story-filled inquiry into the indispensable virtue of loyalty—a tricky ideal that gets tangled and compromised when loyalties collide (a

Collecting data is easy for marketers. Figuring out what to do with it is hard. Technology has made it almost routine for com­panies to know exactly when, wher

For decades we've been told that we live in fast-paced, dog-eat-dog world, that loyalty gets you nowhere, and that we must look out for number one! We've been t

The Theory and Practice of Philosophy

There is an historical element throughout philosophy. As Edel notes, this is always in the context of problems, so emphasis will fall on the major objective of