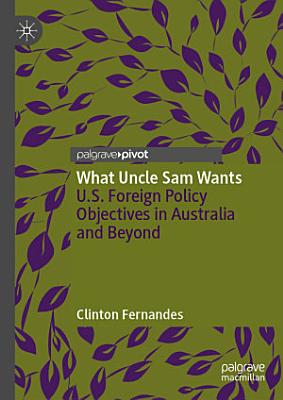 This pivot sheds light on U.S. foreign policy objectives by examining diplomatic cables produced by the U.S. Embassy and Consulates in Australia, some which have been officially declassified over the past 30 years and others which were made public by the anti-secrecy group, WikiLeaks. Providing an original analysis of the cables, this book provides the context and explanations necessary for readers to understand how the U.S. Embassy’s objectives in Australia and the wider world have evolved since the 1980's. It shows that Australian policymakers work closely with their American counterparts, aligning Australian foreign policy to suit American preferences. It examines a range of U.S. government priorities, from strategic goals, commercial objectives, public diplomacy, financial sanctions against terrorism, and diplomatic actions related to climate change, looking back at key events in the relationship such as sanctions against Iraq, the 2008 Global Financial crisis, intellectual property protection and the rise of China.

This pivot sheds light on U.S. foreign policy objectives by examining diplomatic cables produced by the U.S. Embassy and Consulates in Australia, some which hav

Based on a rich array of sources that capture the voices of both political leaders and ordinary Americans, Uncle Sam Wants You offers a vivid and provocative ne

Describes the experiences of men and women in the United States armed services during World War II, discussing such topics as the draft, boot camp, stateside du

Uncle Sam I Want My Money Back Mon!

Buju Bailey grew up in a poverty stricken village in Jamaica and moved to America in search of a better life. Though he found the success he had hoped for, he w

Langston Hughes's most beloved character comes back to life in this extraordinary collection Langston Hughes is best known as a poet, but he was also a prolific

Uncle Sam’s Plantation is an incisive look at how government manipulates, controls, and ultimately devastates the lives of the poor—and what Americans must